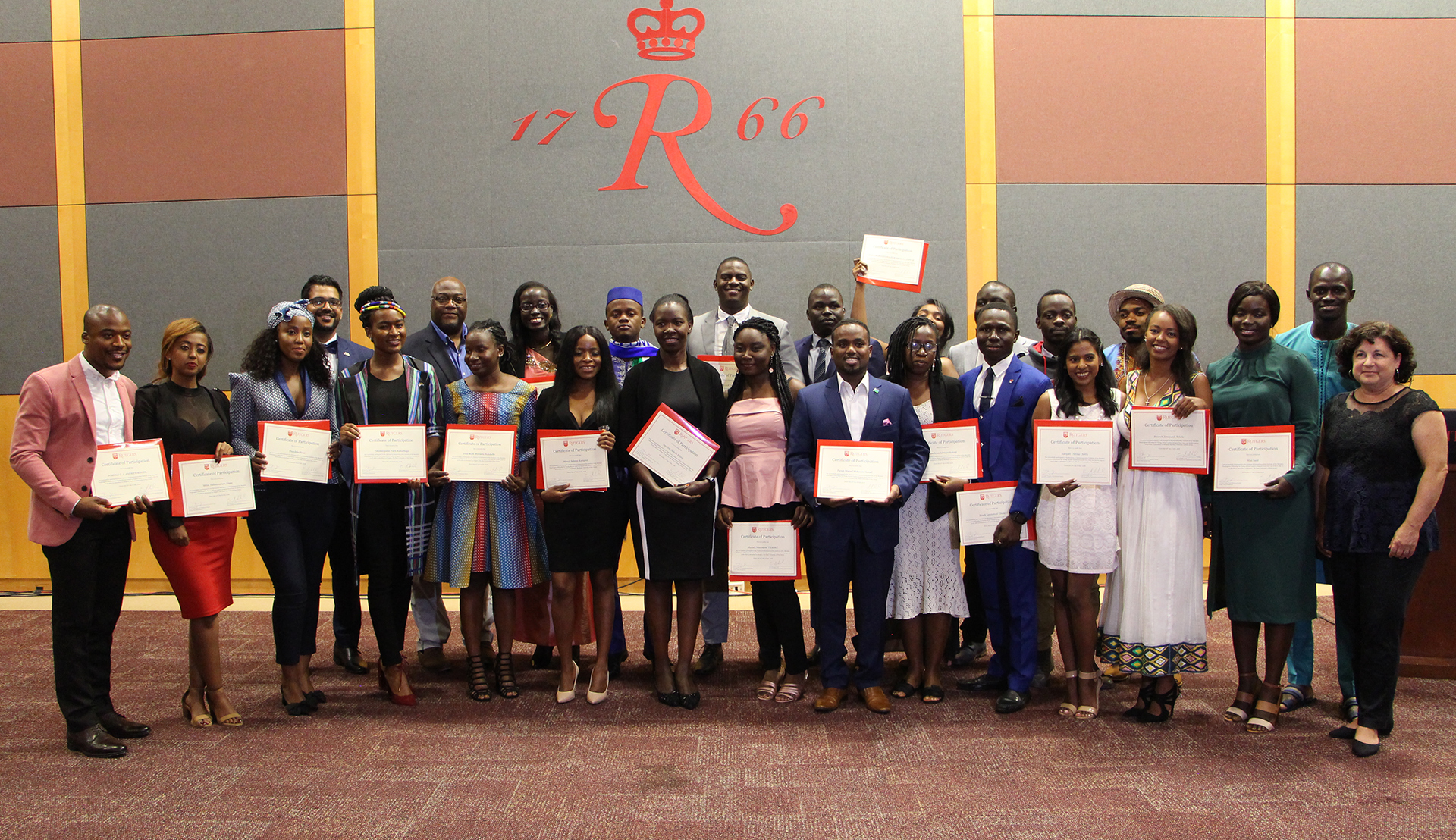 Rutgers was the only university partner selected to host two institutes this year.

For five weeks, Rutgers hosted two cohorts of 25 fellows in one of two institutes: one in civic leadership and one in business and entrepreneurship. The cohort of fellows hosted by Rutgers was part of a larger group of 700 Mandela Washington Fellows hosted at 27 institutions across the United States this summer.

Indira Narciso, a Mandela Washington Fellow from Angola, heard about the program from her husband, who was a 2006 fellow. Narciso participated in the civic leadership institute at Rutgers.

“I work with and am a cofounder of a daycare,” Narciso said. “I had a neighbor who had a baby. She didn’t know where to leave the baby, so she came to ask me and my sister, and we said okay. From there on I grew a passion for taking care of kids. It’s very important because it’s the beginning of everything. When we emphasize on education at that level, they’re going to be greater later on.”

Joram Ndagga, a fellow from Uganda, shared Narciso’s sentiments about the importance of education. His project, Bussi Community Solutions, is working to address school drop out rates on Bussi Island, Lake Victoria, in Uganda. Ndagga hopes the ideas and networks he has gained while at Rutgers will aid in his mission.

“The program has been quite a revelation,” Ndagga said. “It’s very intensive and very engaging as well, both academically and in the leadership workshops. I’ve learned so much that I’m looking to take back home and use in my community. I’ve made so many good networks and good relationships with people that I can work with and that can grow my business idea back home and take it to another level.”

Rutgers was the only university partner selected by the sponsor of the fellowship, the U.S. Department of State, to host two institutes this year. Both institutes shared a common goal: effecting change for the common good. There was a crossover between the two institutes, with some joint activities including visits to iconic landmarks only found in the New Jersey region, cultural activities, community service projects and meetings with community leaders and university faculty to demonstrate real-world outcomes.

The fellows also met with U.S. leaders from private, public, nonprofit organizations, as well as NGOs—and they will continue to develop their skills from their home countries with support from U.S. embassies, the United States Agency for International Development, the YALI Network, and partners.

“I don’t want to just focus on one region now,” Ndagga said. “I need bigger context; I need people who have bigger influence. I hope in the future that I can have a more significant contribution to the…mission of education back in Uganda and be able to contribute something that I strongly believe...would change the education experience of Uganda’s future.” 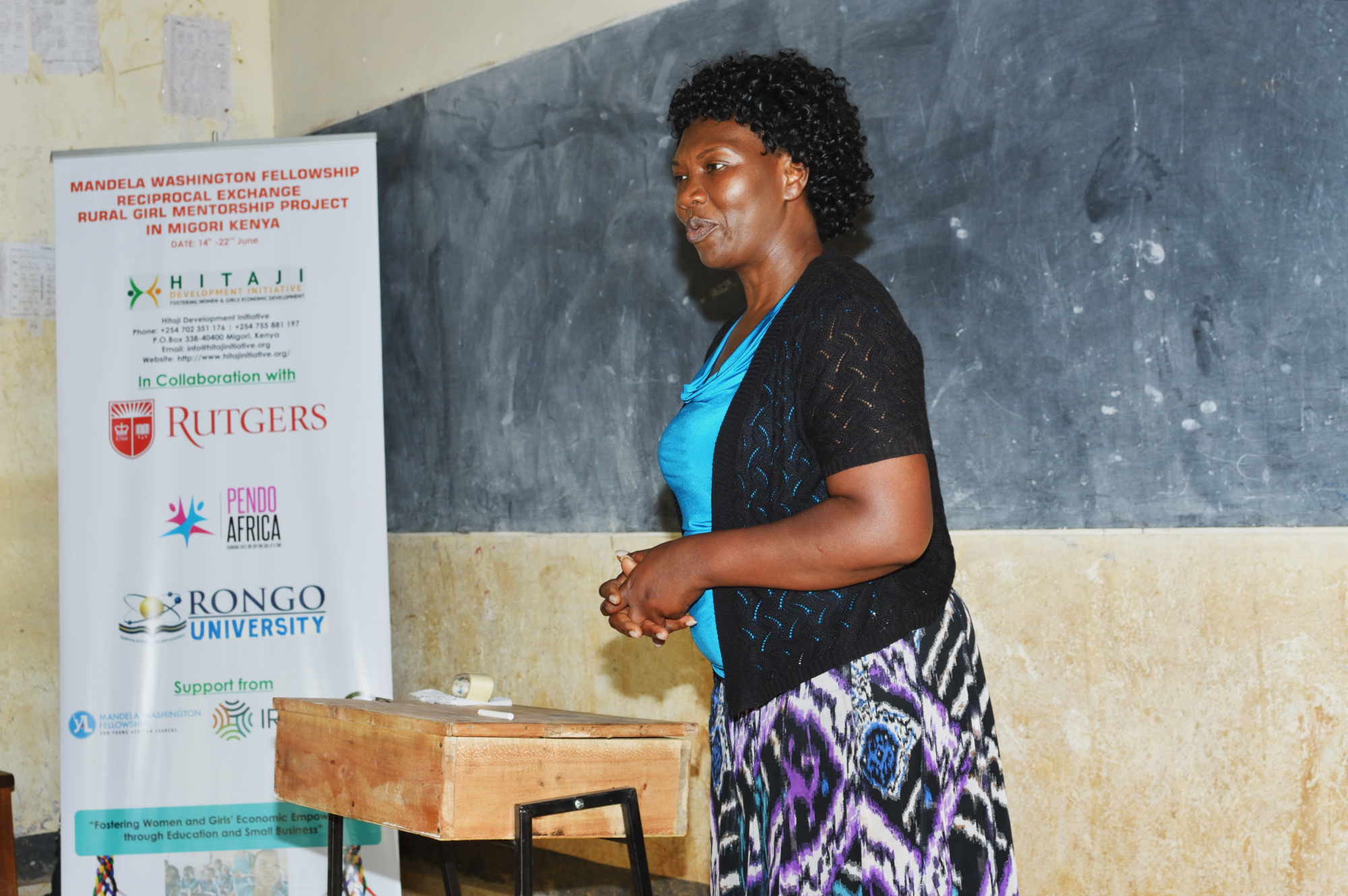 In addition to hosting fellows on campus, Rutgers also proudly sent two of its own to Africa as part of the Mandela Washington Fellowship Reciprocal Exchange, which allows American partners to travel to Africa to strengthen professional connections established with past fellows who visited the United States.

Asenath Dande, associate director of international faculty/scholar services at Rutgers Global, traveled to Kenya in June, where she teamed up with Victor Charo, a 2017 Mandela Washington fellow who she met at a networking reception during the first week of his fellowship at Rutgers.

On behalf of Hitaji Development Initiative—Dande’s NGO that addresses challenges faced by young girls and women in Kenya—they met with local officials, school administrators, girls and parents to establish a mentorship program for girls to participate in during the months when school is not in session.

Ronald Quincy, professor at the Bloustein School, was also selected to participate in the Reciprocal Exchange.

At the end of the five-week fellowship program, the fellows convened in Washington, D.C. for the fifth annual Mandela Washington Fellowship Summit, where they took part in networking and panel discussions with each other and U.S. leaders from the public, private, and non-profit sectors. Following the summit, 100 fellows were selected to participate in an additional six weeks of professional development training at U.S. non-governmental organizations, private companies, and government agencies.

For more information on the Mandela Washington Fellowship, contact Greg Costalas at gcostalas@global.rutgers.edu.