We spoke with former Rutgers Peace Corps recruiter Michael Lifschutz about the ups and downs of Peace Corps service—and the reality of working with potential applicants.

What was it that made you want to help others? 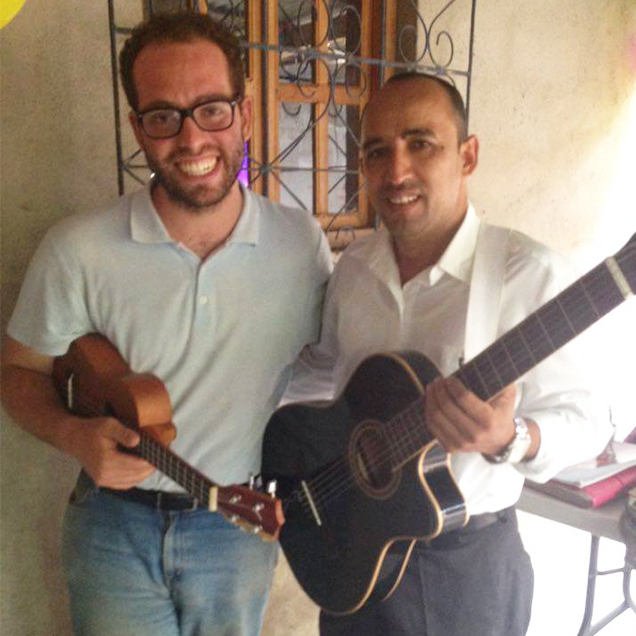 I’d say that service is just something I’ve always wanted to do. I had the fortune of hearing about the Peace Corps while I was young, so it’s always been in the back of my mind. I‘m not sure when the first time I heard about the Peace Corps was, but it must have appealed to me, because I joined right out of college.

You’re a Peace Corps recruiter. Is there a myth about the Peace Corps that you find yourself constantly dispelling when talking with potential recruits?

The biggest myth I find myself dispelling is that there’s one type of Peace Corps Volunteer. I often get asked “So, I’m probably too old to do this, right?” or people assume that all Volunteers hold the same political or spiritual beliefs. This couldn’t be further from the truth. While a good chunk of volunteers certainly are fresh out of college, I’ve personally met successful Volunteers in their 60s, 70s, and older. At one point there was even a 93 year old Volunteer! I also like to remind people that Peace Corps Volunteers vary widely with regards to their political beliefs, and the way they see the world. Volunteers come from all walks of life and I often say that one of the greatest surprises of my service was not only getting to know Nicaragua, but learning more about American culture too.

Is there anyone you meet that you don’t think would be a good fit for the Peace Corps?

I try not to discourage anybody from applying. Everybody has their own reasons for joining the Peace Corps and there’s more than one right answer when it comes to motivation. The only hard-and-fast requirements for becoming a Volunteer are that you be at least 18 years old, and an American citizen. Beyond that, 95% of volunteer openings do request at least a Bachelor’s degree in a relevant field. As long as those requirements are met, the only thing I warn people is that the Peace Corps IS a full-time job. My service was two of the best years of my life, but every Volunteer I’ve met who’s had a successful service is one who was open-minded, curious, and also ready to buckle down and work when the time called for it.

Do you try to turn people from the more popular destinations who might just want to go the beach for a few years?

There are a ton of opportunities during Peace Corps service to explore your host country, relax on the beach, and hang out with friends. That being said, the Peace Corps’s goal is to match skilled candidates with communities where those skills are needed. Wanting to go to a country because it’s beautiful is definitely understandable. Who DOESN’T want to live in a gorgeous, idyllic town with palm trees and sand beaches? However, two years is a long time. When we pair up our successful applicants with their host countries, we try to make sure that not only will the applicant be happy in that country, but that their assignment will challenge them, utilize their skills, and really allow them to thrive.

What about your personal life while you’re away? Did you have breaks to go home or even just breaks throughout the work day to make calls or write emails?

A Volunteer’s internet access depends on their site. I had the good fortune of having a park one block from my house with free WiFi that was actually faster than the WiFi I currently have in my apartment, but that is not the case for everybody. This made it incredibly easy to keep in touch with friends and family back home. As well, every Volunteer gets 48 vacation days throughout their service which they can use to explore, visit home, or just hang out!

However, my experience was that I quickly became involved with several secondary projects that I found interesting and engaging around my town and in the greater Peace Corps Nicaragua community. It’s true when you hear that the first year is all about building relationships while the second year is about implementing projects. I spent my first year integrating as much as possible into my site, and by my second year I was working on some pretty exciting projects in my spare time.

What would you say was the most satisfying moment of your service?

One project I worked on was a series of recycling trainings, in coordination with my site’s Town Hall. We invited upwards of 20 business owners. I made a slideshow. I made props. I prepared a two-and-a-half-hour long class full of examples, hands-on activities, and lectures that I had scripted out to the letter. I also paid my host mom, a baker, to make 30 empanadas, complete with side salads and natural juices called frescos, so that I could hand them out as refreshments during the class. Then, two days before the class, the power went out. And it didn’t come back on. It was the longest blackout during my 27 months in Nicaragua.

Understandably, almost nobody showed up to my class. The slideshow I made was useless without electricity for the projector, and my hopes were completely dashed. I gave the class to the two people who showed up, but without the presentation the class lasted about 20 minutes. Afterwards, I felt defeated. Then, the Town Hall employees that I had been working with for months began showing up to the auditorium where the training was being held to show support. After the last business owner left, I handed out the snacks to the employees who were there. We sat in the courtyard chatting and eating empanadas for five hours until the power came back on, and now that’s one of my fondest memories of my entire service.

What would you say was one of the hardest parts of your service?

I was in Nicaragua from March of 2015 to June of 2017, which means that I was abroad during the 2016 election. Being away from home when there was so much turmoil and negativity coming from the States was tough. I was able to vote using an absentee ballot, but I still felt largely disconnected from major things happening at home. Luckily, because of my internet connection, I was able to stay pretty up-to-date on all the coverage, and talk to my friends and family back home.

Absolutely! 90% of Returned Peace Corps Volunteers (RPCVs) would recommend service to a friend, and I just read an article about a guy starting his seventh tour. It’s not a bad way to spend two years!

Do people leave before their term is up?

What do you think are some of the top reasons and are there countermeasures to prevent that?

In my personal experience, most people who leave do so because of things like family emergencies or medical reasons that are unfortunately out of their control. I’d say that the most common preventable reason for early termination is when people enter the Peace Corps with a set idea in their head of what service will be like. I like to remind anyone who’s interested in the Peace Corps that the things we look for most in an applicant are flexibility and emotional maturity. It’s impossible to predict every facet of Volunteer life until you’ve lived it, and even then it’s so varied that my experience and that of a different RPCV might be hardly even comparable. As long as you start service with curiosity, excitement, and some inevitable butterflies in your stomach, you’re going to be fine.