Dr. Saliou Dione, an associate professor of African and postcolonial studies in the Department of Anglophone Studies, Faculty of Arts and Social Sciences, at Cheikh Anta Diop University of Dakar in Senegal, came to Rutgers as part of a nine-month Fulbright Scholar grant. Dr. Dione holds a doctorate in African and postcolonial studies, a postgraduate diploma in American literature and civilization, and a bachelor’s degree in British literature and civilization.

Dr. Dione’s research interests include society, politics, culture, Pan-Africanism, postcolonialism, African oral and written literatures, comparative literature, gender, sex, sexuality(ies), migration, developmental issues, language, and globalization—among others. He has published articles covering these issues. In addition to being a researcher and a lecturer, Dr. Dione is a bilingual translator who has worked with many international and national organizations. The scholar is scheduled to return to his home university with new research, new perspectives, and new collaborations at Rutgers. 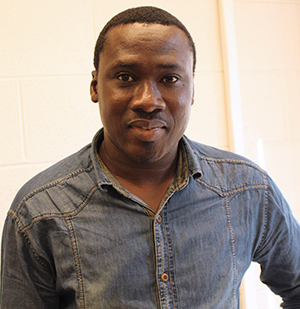