Shining the Light on Paul Robeson's Activism Against the Korean War 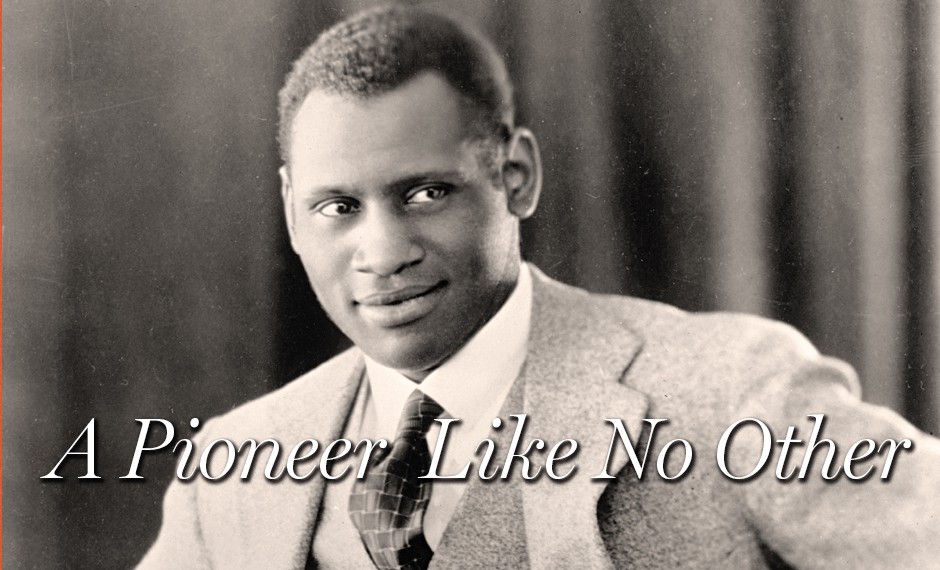 In a recent essay for Adi Magazine, Suzy Kim, Associate Professor of Korean History at Rutgers University–New Brunswick, highlights a little known fact about Paul Robeson, the iconic athlete, artist, and activist who graduated from Rutgers College in 1919: his opposition to the Korean War.

Professor Kim writes: “In 1950, Robeson—an outspoken critic of U.S. policy—was stripped of his passport by the State Department and banned from traveling abroad. A major and oft-forgotten reason for the travel ban was his activism in opposition to U.S. involvement in the Korean War.”

Robeson spoke at “Hands Off Korea” rallies at venues including Madison Square Garden, linking the war in Korea with racism in the U.S. As one of the few public figures openly opposed to the war, Robeson would eventually appear before the House Un-American Activities Committee.

Kim writes that Robeson did eventually get his passport back—in 1958—due to a Supreme Court ruling, but the following note was included, like all U.S. passports at the time: “This passport is not valid for travel to the following areas under control of authorities with which the United States does not have diplomatic relations: Albania, Bulgaria, and those portions of China, Korea and Vietnam under Communist control.”

Paul Robeson’s courage inspires today, more than 100 years after he graduated from Rutgers. In celebration of Black History Month, we asked Professor Kim to further elucidate on Robeson’s activism with regard to the Korean War, as well as the lessons we can learn from him today.

Q. What led you to researching Paul Robeson’s activism regarding the Korean War?

A. Robeson’s name emerged from the archives while I researched the history of the international peace movement against the Korean War. In fact, along with Paul Robeson, his wife Eslanda Goode Robeson was an equally, if not more, central figure especially in the women’s peace movement, and as several biographies of the couple have noted, Eslanda played a key role in politically awakening her husband to the problems of colonialism in Africa and global inequalities, in addition to racism at home. In that sense, while important to highlight Paul Robeson’s significance for Rutgers and U.S. history, we should also remember the crucial role women play alongside such figures and push to restore their rightful place in history.

Q. Why do you think Robeson took such a strong stance with regard to Korea?

A. Robeson connected domestic racism with racist policies abroad, learning from the tragic lessons of fascism during World War II. Only five short years after the end of that horrific conflict, the Korean War began with fears that it could turn into World War III when the U.S. intervened. Robeson saw this essentially as an imperialist intervention, in which Black lives would be expended to subjugate and kill other peoples of color. Before the rise of the Third World and the Global South in movements for decolonization starting in the mid-1950s, Robeson was already sensitive to the shared struggles of the “colored peoples” of the world, pointing out that the “blood-letting in Korea” would “drown the lives and liberties of Negro Americans in a sea of blood.” In other words, his sense of solidarity enabled him to see the shared fate of Koreans and African Americans dying in battle, having to fight a war that benefited neither peoples.

Q. As you mention in your article, many high school history classes in this country typically end after WWII, and thus there isn’t as much known about the Korean War. What lessons from the Korean War are especially relevant to our current times?

A. This is a difficult question since there are probably as many lessons from the Korean War as there are different perspectives on its history as well as different personal experiences of the war from U.S. veterans to Korean survivors. But if I had to pick the lesson most relevant to our time, I would point to the enormously heavy toll the war took, not just in terms of the numbers of dead (over four million, mostly civilians), but also the fact that the war resolved nothing in the end and Korea has remained divided to this day. North Korea started the war as a way to reunify the country (arbitrarily divided by the U.S. and the Soviet Union in 1945), thinking they had the upper hand and miscalculating that the U.S. would not intervene, and the U.S. intervened thinking that it would be a quick victory, also miscalculating that the Chinese would not intervene, all of which escalated the conflict, with the U.S. seriously considering the use of atomic weapons. The most tragic lesson of the Korean War is its many unintended consequences – no one could have predicted just how deadly or long-lasting it was to become, and we’re still dealing with the consequences now, with families separated by the division and North Korea isolated from the world as the oldest enemy of the U.S. The potential use of violence and force has only become easier now with the use of drones and other high-tech weaponry, and so it’s imperative that citizens prevent their governments, as Robeson tried to do, from unintentionally escalating conflicts with devastating consequences.

Q. Tell us about your current research sabbatical, and about the impact of international research on your work.

A. I am currently a fellow at the Institute for Advanced Study at the Central European University in Budapest, Hungary. It’s been an invaluable experience living and doing research in Europe for the first time. My research usually takes me to Korea, but I have been drawn more and more to other locations, working on a book on North Korean women’s history. While North Korea’s leadership dominated by men is most often the focus of mainstream reporting, it should come as no surprise that women also played a pivotal role in various aspects of North Korean history. But since access to North Korea for research is limited, especially now due to the travel ban, I’ve been trying to trace North Korean women’s network within the former Soviet Bloc, which has taken me to Moscow, Budapest, and Amsterdam, in addition to Korea. In that sense, international research has been absolutely crucial to my work. And I cannot emphasize enough the perspective one gets from physically being “on location” to fully contextualize and appreciate the materials one finds. Reading about a topic or a place isn’t enough; you have to experience it, and I always encourage our students to take advantage of our study abroad programs.

Q. It has been over 100 years since Paul Robeson graduated from Rutgers. What lessons does Robeson have to teach us today?

A. Robeson imparts to us many important lessons from perseverance in overcoming adversity to courage in standing up for social justice, but most remarkable for me was his capacity for solidarity. Solidarity is the sense of like-mindedness or unity that comes from empathizing with others, and Robeson had a way to feel for those even half a world away, whether they were coal miners in this country or freedom fighters in Spain or soldiers in the Korean War. While people often talk about unity, this doesn’t come easy or naturally. Robeson was able to cultivate this sense of shared humanity to care as much about what happens over there, as over here. Ironically, in this day and age of globalization with news and communication shared in real time, the world seems less capable of solidarity and more divided than ever. In that sense Robeson’s example of global solidarity is a source of inspiration for us today.

Suzy Kim is Associate Professor of Korean History at Rutgers University – New Brunswick, where she has taught since 2010. She is the author of Everyday Life in the North Korean Revolution, 1945-1950 (Cornell University Press, 2013), which won the James B. Palais Book Prize in Korean Studies from the Association for Asian Studies in 2015. Learn more about Professor Kim here.