Preparing for the Next Natural Disaster: A Mandela Washington Fellowship Symposium 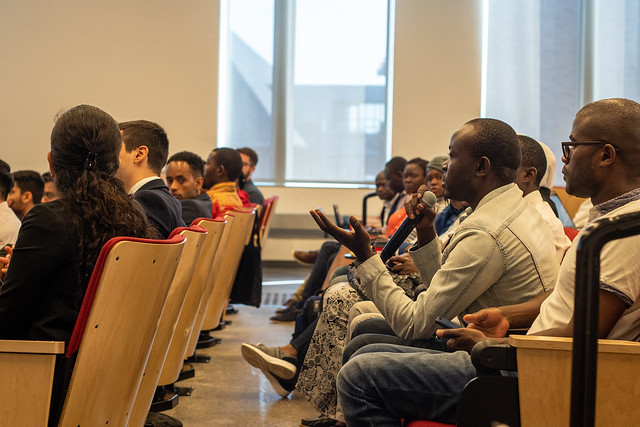 Each year, the Mandela Washington Fellowship Institutes at Rutgers University participate in a symposium on global natural disasters. They hear from speakers about real-life disasters, and then divide into groups to commence a “hackathon,” where they come together to create innovative solutions to the problems that arise when natural disasters strike. This year, the focus was the catastrophic cyclone Idai that affected 1.85 million people in Mozambique, as well as Zimbabwe and Malawi, in March.

The Mandela Washington Fellows were joined by leaders from RWJBarnabas Health, CareOne, MedShare, and Rutgers faculty, including Dr. Kevin Lyons who led the day’s events, as well as a group of interns from Rutgers Biomedical Health Sciences (RBHS) and the SuperGirls from the GrassROOTS Community Foundation. The SuperGirls are a group of middle school girls trained in leadership and community engagement, and they participated in the hackathon alongside the Fellows.

The audience heard first from Roberto Prats, former senator from Puerto Rico, on what has taken place since the devastation of Hurricane Maria in 2017. Prats participated in last year’s symposium, in which the focus of the hackathon was Hurricane Maria, and it was interesting to have his insights, particularly as Puerto Rico is currently embroiled in political upheaval surrounding Governor Ricardo Rosselló’s recent resignation. (Prats is now running for governor of Puerto Rico.) Prats talked about the government’s role in restoring law and order after a disaster, but noted that the government often can’t do it alone. He talked about the need to establish a resiliency commission in Puerto Rico comprised of government and private organizations to share the responsibility in planning for the next natural disaster. He noted that it has taken two years to restore Puerto Rico, but that the island is no more resilient than before. There is hope, however, that the current change in power will lead to better preparedness and outcomes for Puerto Rico.

The audience also listened to a pre-recorded interview with Rui dos Santos Viega, a 2016 Rutgers Mandela Washington Fellow, talk about how he jumped into action to help in the immediate aftermath of Cyclone Idai. After hearing about the storm two days prior to its landing, he saw messages and images on social media, primarily on WhatsApp, that led him to take action. He arrived to the heart of the disaster and discovered there was no drinking water or transportation, and that the hospitals were flooded. Veiga was amazed to see how people still helped each other, even in the worst of circumstances. He spoke about the need for the government and the public to be more proactive than reactive.

Following Veiga’s presentation, the Fellows, interns, and SuperGirls were divided into small groups to begin the hackathon on the topic of how to build resilient, purposeful, and sustainable systems in Mozambique. Their charge was to develop innovative strategies that could be integrated into Mozambique’s eco-system, including re-imagining its day-to-day decision-making process as it related to ten key topics: supply chain and logistics, transportation, health, children, communication, social and mental health, relationship building, energy and water systems, medical needs and healthcare systems, and housing and agriculture.
The groups worked for an hour to create a presentation to deliver to the audience and a panel of judges, which included Prats and Lyons, who voted for the best presentation.

The presentation included data from the disaster, including the fact that more than a million children were orphaned or separated from their families by the disaster, and that many of the basic safety nets broke down completely. The team identified that weak government institutions and services, as well as a poor response mechanism, served to make the situation dire.

“In our presentation, we proposed among many solutions, a strong collaboration, and partnership-building mechanisms from the grassroots level to national and global levels,” shared Samuel Goteh, Mandela Washington Fellow in the Leadership in Business Institute. He added that solutions like “leveraging different platforms such as social media and community-based rapid response structures to mobilize resources to respond to the needs of children and other survivors of the disaster,” were key components of their plan. The team also talked about ideas like using drones to drop off relief supplies.

The hackathon energized the audience and led to many innovative strategies and ideas, but it was more than just a one-day brainstorming event. The outcome of this hackathon is ultimately for the disaster facilitation team, comprised of leaders from Rutgers and RWJBarnabas Health, to consolidate the input from the event to deliver a finished “action” plan to colleagues in Mozambique to help ensure that future natural disasters can be managed in a way that protects communities from total collapse.

The Mandela Washington Fellowship—a flagship program of the Young African Leaders Initiative (YALI) supported by the U.S. Department of State—empowers young African changemakers and leaders through academic and hands-on training and networking at universities across the United States. Fellows from sub-Saharan Africa are chosen to represent their countries through a highly competitive application process and have the opportunity to participate in one of three leadership institute tracks: business, civic engagement, and public management.

Here are some photos from the event.