COVID-19 and (Im)Mobility in the Americas 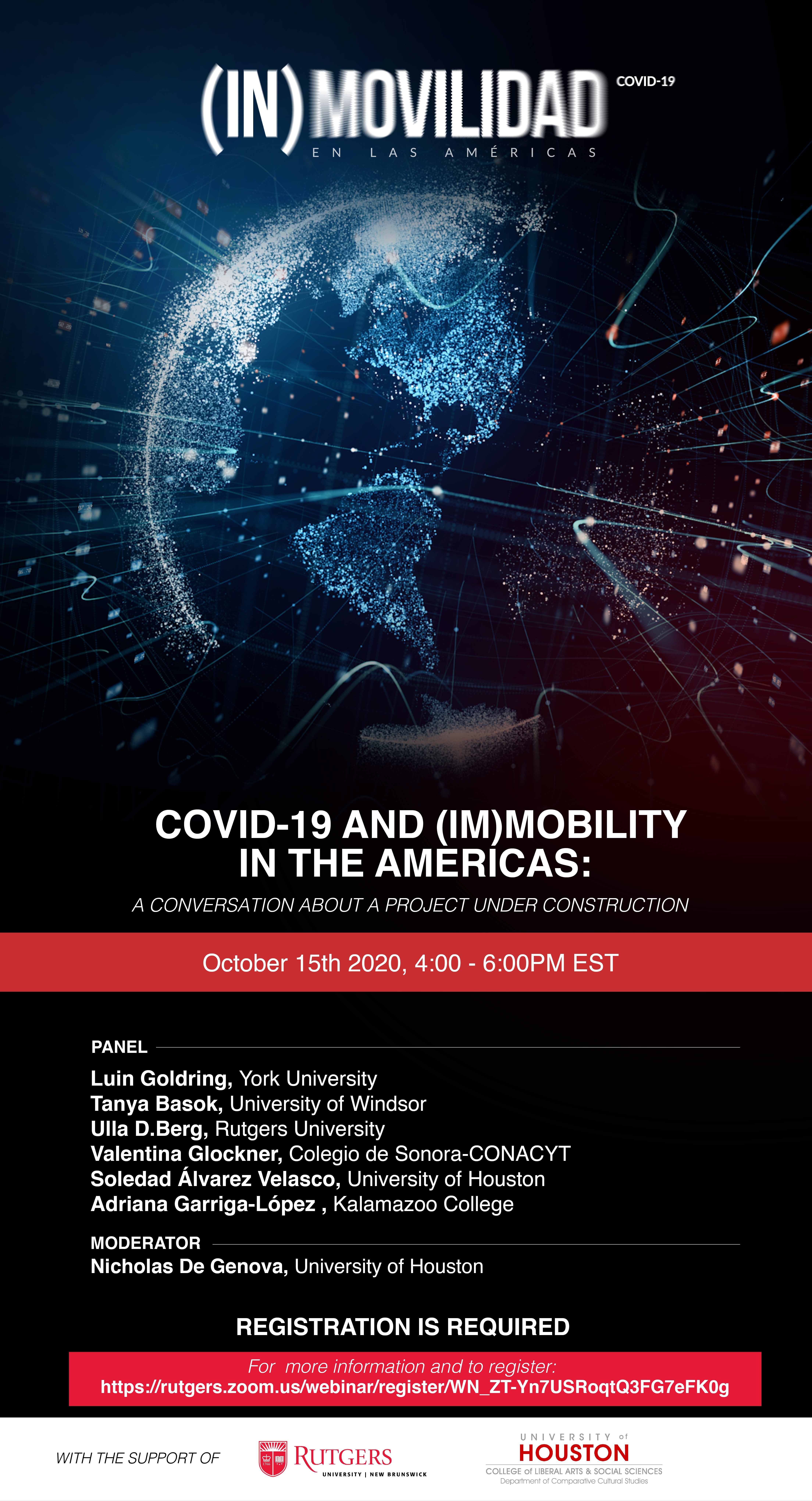 Nicholas De Genova is Professor and Chair of the Department of Comparative Cultural Studies at the University of Houston.  He is the author of Working the Boundaries: Race, Space, and "Illegality" in Mexican Chicago (2005), co-author of Latino Crossings: Mexicans, Puerto Ricans, and the Politics of Race and Citizenship (2003), editor of Racial Transformations: Latinos and Asians Remaking the United States (2006), co-editor of The Deportation Regime: Sovereignty, Space, and the Freedom of Movement (2010), editor of The Borders of “Europe”: Autonomy of Migration, Tactics of Bordering (2017), and co-editor of Roma Migrants in the European Union: Un/Free Mobility (2019). Website: www.nicholasdegenova.com.

Tanya Basok is Professor and Undergraduate Chair in the Department of Sociology and Anthropology at the University of Windsor. Her research focuses on migrant rights and pro-migrant advocacy, including labour rights and social integration of Mexican farmworkers in Canada, the role of labour organizations and other activists in advancing the rights or temporary migrants in Canada and female migrants in South and Central America, Mexico, and the Caribbean,  and Central American refugees and labour migrants in Mexico.  Currently, she is conducting a SSHRC-funded project on Status Regularization Programs for Irregular Migrants in South America, Costa Rica and Mexico.

Ulla D. Berg is Associate Professor of Anthropology and Latino and Caribbean Studies at Rutgers University where she also directs the Rutgers Center for Latin American Studies (CLAS). A socio-cultural and visual anthropologist by training, her research and teaching focuses on transnational migration and (im)mobilities in Latin America and among U.S. Latinx populations. Berg’s current research examines the effects of U.S. immigrant detention and deportation on migrant communities in Ecuador and Peru. She is also conducting a rapid-response project on the spread of Covid-19 in New Jersey detention centers.

Dr. Álvarez Velasco is a postdoc in the Department of Comparative Cultural Studies at the University of Houston. She holds a PhD. in Human Geography from King’s College London. Her research investigates the nexus between undocumented transit migration, violence, and the capitalist state, particularly in the case of the extended migratory corridor from Ecuador through Mexico to the United States, and focuses on the production of Ecuador as a global space of transit used by Ecuadorean deportees and migrants from Africa, the Middle East, and the Caribbean Region moving towards the United States. Her work also analyzes how the externalization of U.S. border enforcement policies impacts the South American region, and the movement of unaccompanied migrant children who transit through the extended corridor connecting South America and the United States. She is the author of Frontera sur chiapaneca: El muro humano de la violencia: Análisis de la normalización de la violencia hacia los migrantes indocumentados en tránsito (CIESAS-UIA, México, 2016), and co-author of Entre la violencia y la invisibilidad: un análisis de la situación de los niños, niñas y adolescentes ecuatorianos no acompañados en el proceso de migración hacia Estados Unidos (SENAMI, Quito 2012).

Adriana María Garriga-López is an anthropologist and artist. Born and raised in San Juan, Puerto Rico, Garriga-López is Associate Professor of Anthropology at Kalamazoo College in Michigan and Associate Faculty at the Brooklyn Institute for Social Research. She holds a Ph.D. in Anthropology (2010), as well as Master of Arts (2003) and Master of Philosophy (2006) degrees in Anthropology from Columbia University in New York and a BA (2001) in Cultural Anthropology and Comparative Literature from Rutgers, the State University of New Jersey. Garriga-López leads the Puerto Rico group for the (Im)Mobility in the Americas and COVID-19 project. Website: www.adrianagarrigalopez.com.

Valentina Glockner Fagetti is a Mexican anthropologist working at El Colegio de Sonora as a Cátedra CONACYT. She specializes in childhood studies and the anthropology of migration and the state. Her research in Mexico, India and US explores reflexive and participatory methodologies, as well as strategies for ethnographic self-representation. Her research has won national awards from INAH, COLMICH and the Mexican Academy of Sciences in Mexico. She has directed and co-directed projects funded by CONACYT, the National Geographic Society, CLACSO-CROP, CONTEX, and the National Science Foundation. She is a founding member of Colectiva Infancias, a network of researchers specializing in social studies on childhood and migration in the Global South. She has been a fellow at the Institute for Advanced Studies at Princeton, and the Matías Romero Program.

For inquiries about the event or to send questions in advance of the event please email Ulla D. Berg at uberg@lcs.rutgers.edu.